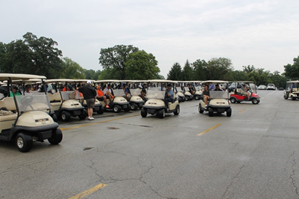 Chicago-based contractor Western Utility is proud to have recently sponsored the 39th Annual Cohn Weil Memorial MS Outing that took place on July 10th at Northmoor Country Club in Highland Park, Ill. The all-day event featured a fabulous golf tournament with morning and afternoon tee times on a Donald Ross-designed course, a buffet lunch and the option to play mahjong, canasta or bridge. The evening included a cocktail reception, auction and gourmet dinner.

Bill Sanchez, Business Development Director at Western Utility, who is also an elected member of the Board of Trustees for the Greater Illinois Chapter of the National Multiple Sclerosis Society, was among the VIPs who attended the event. “I was honored to be part of the golf outing,” Sanchez stated. “I have seen the devastating effects of this disease and am honored to continue the fight.”

Western is very involved with and has raised a great deal for the National Multiple Sclerosis Society. Sponsored events include the Dinner of Champions, held last Fall at Chicago’s Adler Planetarium. The event raised more than $1,250,000. The company has also sponsored and participated in Muck Fest, a 5k run through 14 obstacles for fun and team building, held at the Lake County Fairgrounds at 1060 E. Peterson Rd. in Grayslake, Ill. In September 2016.

Thank you and congratulations to all for helping eradicate MS forever!

About the National Multiple Sclerosis Society

The Society mobilizes people and resources so that everyone affected by multiple sclerosis can live their best lives as we stop MS in its tracks, restore what has been lost and end MS forever. Last year alone, through our comprehensive nationwide network of services, the Society devoted $122.2 million to connect more than one million individuals to the people, information and resources they need. To move closer to a world free of MS, the Society also invested $54 million to support more than 380 new and ongoing research projects around the world. We are united in our collective power to do something about MS now and end this disease forever. Learn more at www.nationalMSsociety.org.

I want to compliment your team on getting our project started in a timely fashion. We appreciate the focus and proactive attitude you have demonstrated over the last 2 weeks. I was also very impressed with the comprehensive and professional safety plan presented. I left the meeting with confidence knowing that safety is a priority for WUC. Sincerely, thank you, we really are very pleased! — Dave Huff, G4S Secure Integration

Building for the Future... Today

Western Utility is ready to build your future…TODAY! Our company slogan is not just words with no meaning. These words have significance for our team members and guide us in how we work for you every day.

Whether you are a client, team member, subcontractor or supplier, you are part of our family. And we are always on the lookout for the futures of our family members. Everything we do is with the long-term in mind – every action we take, every dollar we spend, every person we hire is all done with the goal of BUILDING and bettering your future. As a family, a brighter future for you means a brighter future for all.